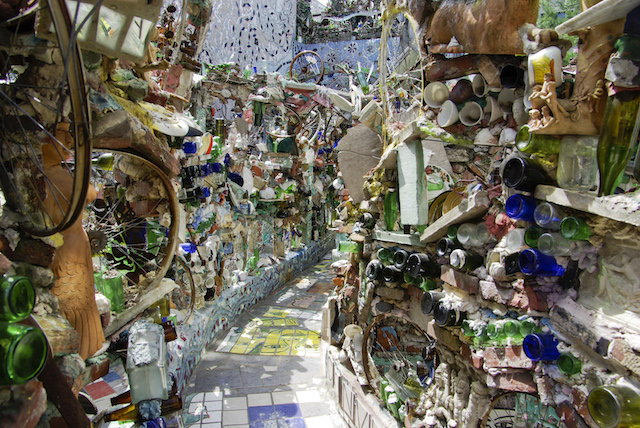 Of course Sara describes it much better herself in the blog post on which this talk is based, but writing is remembering, right?

It’s actually ugly, but also what I like about Philly. A city that’s beautiful and shambling at the same time. One thing I don’t like is that it’s filthy.

When you look at the litter in the city, there’s always other people to look at. People blame city workers not doing a good job, animal owners who don’t clean up, kids who get home from school and throw their stuff on the floor.

The city doesn’t want this filth either so they make campaigns about it. And laws. There’s a whole chapter in the city code. It’s not that hard actually.

But I also love the web. I work with content all the time. I knew I would write since I was 6. I like a lot of it. I think a lot of sites are ugly too.

I got to the Verizon site. I was trying to decide if I should stay or go to a different provider. So I got to their site and after scrolling, I got to the section trending now. There’s an article about metadata. I look at the photo. It clearly looks like a stck photo, but who makes such a thing? It’s even worse if it was custom made than not. What would Verizon do about metadata?
As I am a content strategist I click and go down the rabbit hole. Soon I realize it’s a garbage article about metadata. Some standard text that doesn’t even help. How could it be, as it’s not about them. About their business.

But I notice I ended up somewhere else, on the solutions lab. I click on and get at a weird collection of articles. It asks me if would like to download a paper. I’m going all the way down now, so I say yes of course. I get an FAQ and all the way at the end it says: “How do I sign up?”. That’s not an FAQ. That’s a Call-to-action, and a very bad one.
How many people get all the way down here and don’t know what’s happening.

Content is always late, too long. not mobile ready. A PDF of 99 pages. Some PowerPoint. The content is messy.

My job is to help people fix stuff like this. I think a lot of people have been talking about it. Spending time on making content better.

We can’t change anything because this department wants it. And BTW, the CEO still wants her letter on the homepage. You try to keep the content up with the chaos. but it always catches up with you. It feels like a game of whack-a-mole.

Time for a new approach. The idea to fix content is exhausting.

I try to think about content, companies and the sites we work with as difficult. I try to think of it as cities. They are chaotic and imperfect. You have to change a lot of little things over a long time. The same is true for organizations and content. What we can do is turn projects into a catalyst. Do something for the longer term. As opposed to looking at the next redesign.

Something that helped me and you can all use. Change feels difficult. People have given up because it’s demoralizing. People want to do a given job, but if things feel big people stop trying.

Citizen-driven effort to revitalize one Philadelphia city block on West Rockland Street. Only trying to fix their block. We can’t change everything, but we can fix this block.

Big problems feel big. We go in with a grand idea: the only thing you have to do is rewrite everything. Cut everything in half to work for mobile. Transform all 4.567 PDFs to structured content. It’s hard for them. Avoid the overwhelm.

I’m starting with just one thing. I want something that’s visible, valuable and scope-able.

Find where your skills align with the customers problem.

For example, let’s say you’re part of the team changing an existing site to responsive design. Everybody is excitedly resizing their browser windows. Along the way, you come upon those thousands of old PDFs. They’re not ideal, but there are far too many to deal with now. What if you found a subset for example, something like product spec sheets?
You’ve just found your one thing. If you took the product information out of the PDFs and turn them into a structured system. It’s something you know about, and it causes a lot of pain for the customer (having to update them all the time), and the users.

It’s tempting to fix everything, down to the root cause. Trusting to design a clean system with good interface etc. Instead focus on fixing some little thing. Little changes make people feel optimistic. Improves the morale.

It’s easy to get in the mode of waiting. Waiting for others to pick up the litter. On West Rockland Street they ask their neighbours about how to tackle problems and which ones first. Stop waiting and start doing.

We need people to take charge too. Need more people to be engaged.

It’s not enough to have one team to fix the site, because the organization doesn’t learn from it. How do we get to a place were all people feel engaged to fix this. Content is the thing that is created most often by the largest number of people. If you can’t get them to take ownership, they’ll never learn to manage the chaos.

Ask them, don’t tell.
Don’t tell what they do wrong. Figure out what their problems are and what they want to do.

Content people often don’t have a web background. But when I ask them about the site, they are invested, thier opinion matters. Then get them together. We need to start making decisions, not just talk about it.

I worked on a project where several people were organizing the content. The economist on the team tagged the content. In the end they had 600 tags. They wanted to connect people who were new to the topic. Want to make them go to a specific page. We looked at the tags and thought there was no way to connect them all together. Let’s cluster things, make decisions how you want to make your story.
They talked through the important choices and left the room in 4 hours and having decided on the 4 main topics and 28 sub topics. To get them to agree, was massively important because they chose it. It’s not an arbitrary thing somebody told them to do.

It is hard to make content fit in a design comp you just got handed down. Get people together to start writing and talking through how they’ll do it. Talk about it together and doing it together. Not feeling alone. Have somebody to do things with. Do things with other people instead of for people.

Get commitment for the project. Over longer time.

I hear it all the time. We made a beautiful thing, but the client made it turn back into garbage after 6 months.
Okay here’s the new site and content. Run with it. They really want to, but it’s hard. They’re excited and try to take the leap, but jump off the cliff.
So just give them a map with small steps to take over a longer term. Where are we and how do we move forward.
They know why they shouldn’t to upload PDFs, but why should I do this content. For my customers.

East Passyunk was a neighbourhood with lot of Italian-American enclave of family shops and restaurants, but younger people moved to the suburbs and people got older. The place didn’t move along. People got together and thought about how to get a declining neighbourhood thriving again.

They wanted to create a neighbourhood with not only fancy restaurants. Places where locals would like to go. Getting a beer, or groceries. They decided to:

Their roadmap works because it’s sustainable. It’s not all at once. As they improve the neighborhood, more businesses want to be there

Move from churned out, to purposeful. Made by a content department that decided they needed a blog with x posts and articles. Long-term changes. what we do is break it down in smaller projects.

How do we reach more people at ALA that don’t know about it yet. Lots of younger people joined the industry lately, who haven’t heard of it. Which ideas are viable, most helpful, important. Identify projects. Breaking them down in smaller things.

Who will lead the project. People need a sense of responsibility. Look for a cadence when do they happen?

Get things on sticky notes and line them out on a wall. When, who. Sort them What’s the next step?

**Beamer suddenly stops working and only shows snow, but Sara goes on undisturbed 🙂

I love being in charge and fix things. But with content you can’t. Its chaotic. People are chaotic. Messy. Weird.
Made by people so its a pain to deal with. like people.

We’re not here to make it perfect, we need to accept that the web and content ebbs and flows. As it also happens in organizations and the people who work there. Instead of fixing that, we need to make people see their content differently.

If you work with content, help people work through change.

Hello all, thanks for visiting. I'm Rogier, and this will be my blog. Still setting it up, so keep your fingers crossed ;-)